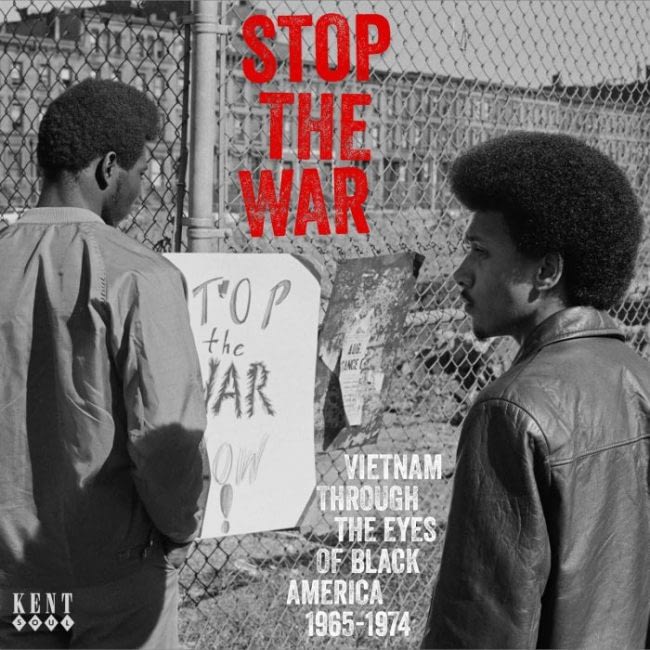 The final instalment in our trilogy spotlighting black America’s involvement in the Vietnam War.

“When are you going to do another volume of Vietnam soul tunes?” has long been one of the most frequently asked questions posed to us here at Ace. Almost 16 years have passed since we issued the previous volume, and that’s considerably longer than the Vietnam War itself lasted, but we feel “Stop The War” is every bit the equal of the two collections that preceded it.

Presented in loosely chronological sequence, the set contains many important musical statements on various aspects of the conflict, from shipping out to coming home. Even though it has been over for almost half a century, it’s still possible, through these songs, to sense the frustration, anger and sadness that many Americans felt towards a war that lasted far too long and claimed far too many lives on both sides.

Featured artists include major names such as Marvin Gaye, the Impressions, Dionne Warwick, William Bell, and the Staple Singers alongside lesser known but equally worthy artists including Michael Lizzmore, the Pace Setters, Charles Smith & Jeff Cooper and Artie Golden, all of whom have something important to add to the story. You’ll find recordings reflecting every emotion war can bring about, from initial optimism to creeping frustration and ultimately despair and desolation. Given the huge amount of young black Americans who were conscripted to a war from which so many would never return, it is not hard to understand the vitriolic attitude of so many of these songs.

The vast majority of these tracks have not previously appeared on Kent, and several make their CD debut here. Annotated and illustrated as copiously you would expect a prestige Kent project to be, “Stop The War” is a fitting and forthright finale to a trilogy on which it has been extremely gratifying to work. Across three CDs, we have now brought you 74 significant musical comments on what is probably the most remembered and reviled conflict outside of the two World Wars. We are confident that demand and acclaim for this new volume will be as strong as it was for the previous two.

06 Fighting For My Baby – Donald Jenkins

07 Mama) My Soldier Boy Is Coming Home – The Shirelles

09 Going On Strike – The Emotions

11 My Ship Is Coming In (Tomorrow) – The Pace Setters

16 Men Are Getting Scarce (Album version) – Chairmen Of The Board

18  Stop The War – The Impressions

21 The War Is Over (My Brother) – The Sensational Saints