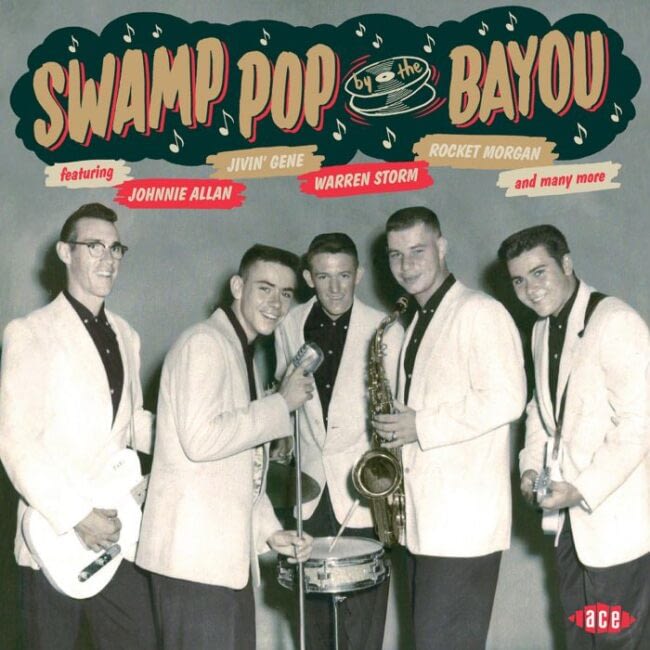 In the mid-50s, as rock’n’roll swept across the USA, the Cajun youth of South Louisiana and South East Texas absorbed the R&B sounds emanating from New Orleans. This was reflected in their music, making it so distinctive. They thrilled to the sound of Fats Domino, Smiley Lewis and Huey Smith and performed their songs with the bands they formed, while the area’s new breed of songwriters – Bobby Charles, Jimmy Donley, Jivin’ Gene, etc – assimilated the Crescent City style in their work. Swamp pop was born, although the genre had yet to be named.

Several artists were plucked from the scene and sanitised by big record companies to turn them into pop stars, but there is no sanitisation here on “Swamp Pop By The Bayou”. Half the tracks are previously unreleased and most of the rest are pretty obscure. Jivin’ Gene’s ‘Breaking Up Is Hard To Do’ is the only national hit, but even that seems to have dodged CD compilation. Also included are examples from genre favourites such as Johnnie Allan and Warren Storm, plus Rocket Morgan, Gene Terry and Tommy Strange, artists better-known for their rockabilly recordings.

The tracks all come from the tape vaults of South Louisiana record men J.D. Miller, Floyd Soileau, Sam Montel and Eddie Shuler, who recognised good songs and singers when they heard them. The music they captured has been a joy to fans of rockabilly, R&B, blues and swamp pop for over 50 years. The vast untapped stockpile of recordings from these and other sources mean the future of the “…By The Bayou” series seems very exciting.