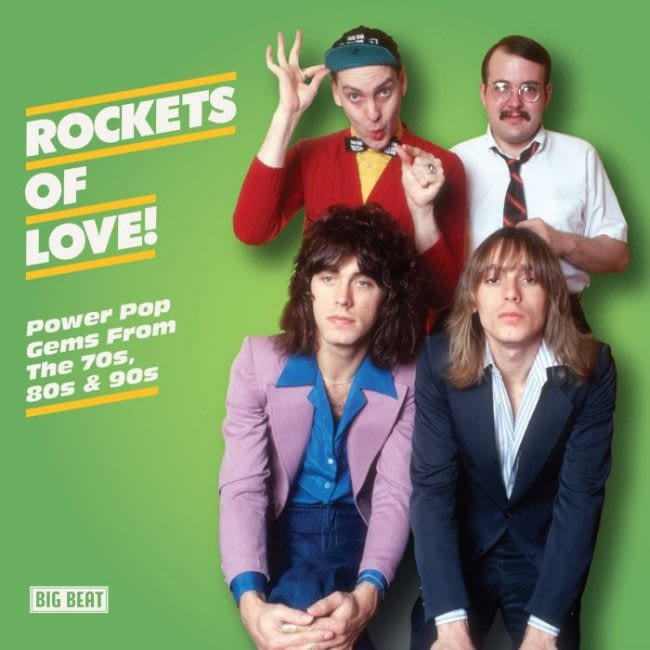 Another collection of top-notch songs delivered with all the jangling guitars, catchy hooks, banging beats and snappy tunes that make power pop such a blast.

Making pronouncements about power pop is a risky business, as disputes abound on websites dedicated to the form, not only about what is and isn’t power pop but about when it began and ended. One site insists that posts should relate only to recordings made between 1976 and 1981, while the belief in most others is that power pop started in the late 60s with Beatles-influenced bands such as Badfinger and continues to flourish right up to this day. We lean more to the latter view.

On this follow-up to our “Come On Let’s Go! Power Pop Gems From The 70s & 80s” compilation, we have extended the timeframe to cover the 90s and even include one outlier from the 2000s. There was just too much great power pop being made beyond the 70s and 80s for us to ignore. Another change to this volume is that we look beyond American shores and include selections from the UK and Australia. As before, we take a broad view of power pop and you will find elements of punk, new wave, garage and various other sub-genres within. However, we can guarantee that all our selections are top-notch songs delivered with all the jangling guitars, catchy hooks, banging beats and snappy tunes that make power pop such a blast.

Among the many highlights are ‘Had To Make You Mine’ by Cheap Trick and ‘Better Things’ by the Kinks. An oft-overlooked gem from their “Busted” album, ‘Had To Make You Mine’ screams “the Beatles!” and shows Cheap Trick revisiting their 60s roots. ‘Better Things’ returned the Kinks to the UK singles charts in 1981 after a nine-year absence. Its uplifting message should have made it a trans-Atlantic #1 with Dave Davies’ clever guitar lines and brother Ray’s inspired lyric combining to create a feeling of rejuvenated optimism as they look forward to overcoming old difficulties with a fresh new start – the perfect antidote for recent times:

Be an optimist instead and somehow happiness will find you

I know that better things are on the way

02 It’s You Tonight – The Flashcubes

03 Whatever Happened To Fun… – Candy

10  Sooner Or Later – The Innocents

11  Winter In The Hamptons – Josh Rouse

16 Hearts In Her Eyes – The Records

19 Another Night – The Searchers

20 That’s What She Said – The Greenberry Woods