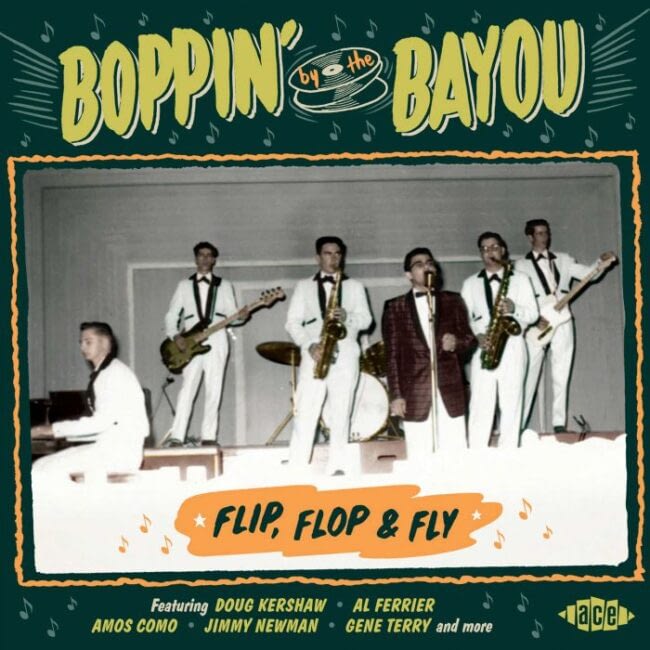 Rare or previously unissued rockers from the vaults of J.D. Miller, Eddie Shuler, Sam Montel, Pappy Daily, Luke Thompson or the artists themselves.

It’s back to boppin’ with this 20th in the “By The Bayou” series, the seventh highlighting the young white rockers from the Gulf Coast area, which runs from New Orleans, Louisiana in the east to Port Arthur, Texas in the west. It was an area dominated by swamps and bayous, where crawfish and rice were farmed, alligators were hunted, fishing was for food and where there was oil to be drilled. All of these occupations had one thing in common: hard physical labour, which bred the need to relax and party at the end of the week, and fulfilling that need were countless clubs and bars in every town, large or small, where music had to be loud to be heard.

All of the artists featured on this CD could tell you tales about these clubs: about the raucous atmosphere, the buzz of playing, owners trying to rook them out of their pay – particularly if it was a cut of the entrance money – and the danger of looking too long at one of the women dancing. The men there were fiercely protective of their women and there were plenty of weapons around. These establishments were the centre of our singers’ and musicians’ existence. When they cut their records they hoped for a hit but the realism was that if you had your name on a record you could command higher pay at your gigs.

All of this background contributes to the distinctive sound of South Louisiana rock’n’roll, whether at the rockabilly end of the spectrum or what would become known as swamp pop. What matters most with this music is not to pigeon-hole it but to lose yourself in its feel – and you have feel a-plenty in this collection, from the raw exuberance of the Tune Tones, a family band comprising three Clement brothers and their brother-in-law, to the mastery of singer/drummer Warren Storm.

The 28 tracks on this CD include a host of previously unissued masters, alternate takes and mega-rare 45s and 78s. Of particular note are the previously unissued distinctly different versions of Al Ferrier’s ‘Blues Stop Knockin’’ and Johnny Jano’s ‘Mabel’s Gone’, Jimmy Newman’s very rare ‘H-Brown Shuffle’ and our stunning title track, the previously unheard version of ‘Flip, Flop & Fly’ by Gene Terry, which demonstrates why Gene was so proud of his band, the Downbeats, and why Eddie Shuler praised him as one of the best artists he ever had on his roster. So grab a glass of something strong, crank up your hi-fi, slip on this CD and get to boppin’!