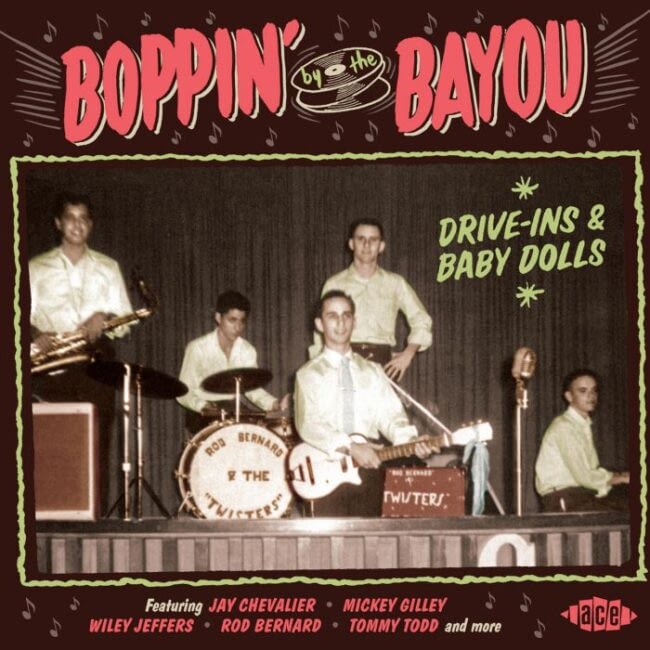 This exciting new addition to our popular “By The Bayou” series features 28 tracks from the vaults of Louisiana and South East Texas record men J.D. Miller, Eddie Shuler, Sam Montel, Pappy Daily, Huey Meaux, George Khoury, Joe Ruffino, Diamond Jim Wheeler and Melvin Dodge, plus tracks by Louisiana artists recorded by Murray Nash and Dee Marais. This might be the 16th in the series but it continues to unearth unknown goodies and dust off long-forgotten gems.

Rod Bernard contributes a fine version of the Chuck Berry classic ‘No Money Down’ and Pee Wee Trahan (aka Tommy Todd) delivers a demo of ‘Prisoner’s Song’ where J.D. Miller encourages him to speed up the song Presley-style, resulting in a primitive rockabilly version. Sadly, after this CD was compiled I learnt of Pee Wee’s death on 3 September. As well as being hugely talented, he was a modest and unassuming man who it was a privilege to know.

Also in the mix are a great piano solo from series favourite Gene Dunlap on Jay Chevalier’s ‘Khruschev And The Devil’ and piano pounders from Mickey Gilley and Cookie Roberts. There are hot guitars too, from Grant Clement on the Tune Tones’ outings and from Johnny Winter on Burl Boykin’s ‘Let Me Come Your Way’ and his own classic ‘School Day Blues’. Bobby McBride steps upfront with his bass guitar on Zoro & the Zips’ ‘Frankie & Johnny’ which features a drum solo from Warren Storm, while Cajun boppers are represented by Cleveland Crochet’s Sugar Bees and Terry Clement.

If you have a rockabilly heart, this collection is going to slap away at your heartstrings, set your fingers snappin’ and your feet a-tappin’. It’s time for some good ole Southern rockin’.