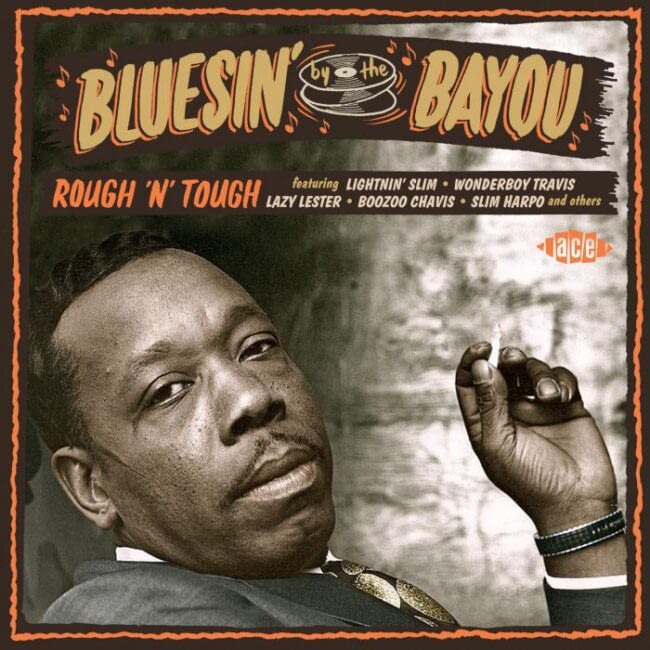 The second “Bluesin’” volume in the “By The Bayou” series concentrates on musicians from South Louisiana and South East Texas discovered and recorded by J.D. Miller and Eddie Shuler. These two giants of the post-war recording scene were supreme talent-spotters. They knew the sounds that appealed to the local record-buying public, their target audience. What they couldn’t have known, or even guessed at in their wildest fantasies, was that the appeal of their recordings would last so long and encompass the globe. They probably thought it was just a passing fad when Mike Leadbitter in the late 60s, and then Bruce Bastin in the early 70s, made pilgrimages from England in search of the music, its artists and the label owners. Now here we are, over 60 years later, still uncovering blues masterpieces from their catalogues.

The “Bluesin’” CDs focus on the downhome sounds emanating from Miller and Shuler’s studios in Crowley and Lake Charles, so plenty of guitars and harmonicas are featured. The blues is a vehicle for storytelling and nowhere is that illustrated more effectively than on the opening track, where Lightnin’ Slim and Lazy Lester ad lib their way through ‘Trip To Chicago’, a real life tale of a group of musicians headed for the Windy City to play a gig. I was knocked out when I discovered this previously unheard version in the Miller tape vaults and instantly determined to make it the lead track as soon as I could. Of the remaining titles, 16 are previously unissued songs or alternate takes. The songs deal with betrayal, defiance and celebration, taken at a variety of tempos – from the slow and tortured to pounding rockers – with the bonus of a touch of zydeco, a South Louisiana form of blues where the accordion replaces the harmonica.

So ready yourself for transportation to a steamy Louisiana night, on the back porch or in a pulsating juke joint. Get a grip of that air guitar and bend the strings along with masters such as Lightnin’ Slim, Classie Ballou and Guitar Jr. This is music that has fired the imagination of legions of fans from all walks of life around the world for more than 60 years. It’s a pure delight to bring you a whole compilation of little-known or unheard performances from bosses of the genre, captured at their peak.