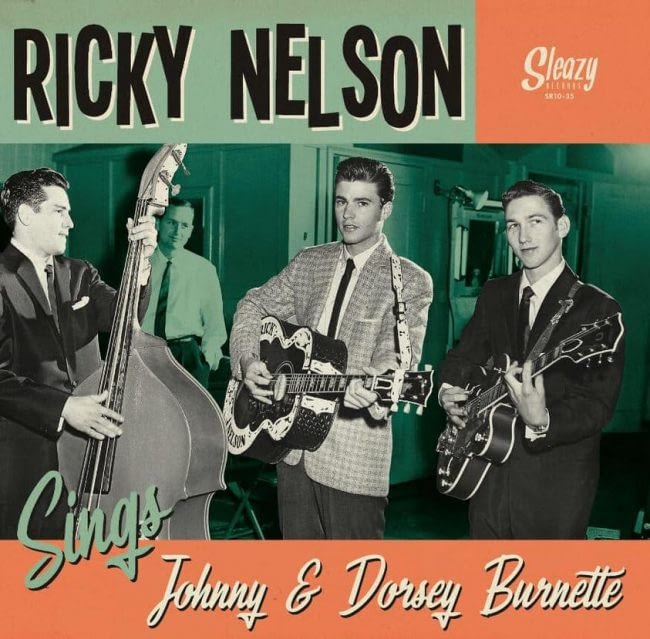 No ballads here!!!!!!!
These two brothers started with a group called “The Rock N’ Roll Trio” and one listen to those tracks lead into one direction – authentic, powerful, and dynamic rock n’ roll. And successfully, I may add.
Essentially, there was no need to change their entertaining formula when composing for Ricky Nelson and most of Ricky’s rockers came directly from the Burnette Brothers. So they continued their success for Ricky, to much critical acclaim and considerable esteem with some of Billboard’s significant achievements and milestones.
James Burton cut his teeth on the guitar solos he would create from these Burnette rockers, with the guitar break on “Believe What You Say” to be arguably one of the finest. James Burton credits the Nelson family for his success to this day.
There were a total of 19 songs that Ricky recorded by the Burnette Brothers; 8 of which Johnny had written/co-written until his early passing in August, 1964 at the age of 30 years old. His brother Dorsey died in August, 1979 at the age of 46 years but not before writing/co-writing the remaining 11 tracks that Ricky recorded.
A few special notes here are worth mentioning.
“Hey Daddy” cut by Billy Burnette (at age 7) is the son of Dorsey. Billy fondly recalls cutting his first record with Ricky Nelson and his band, with Ricky singing harmony along with Billy. He was absolutely thrilled.
“Tired Of Toein’ The Line” written by Rocky Burnette (at age 27) is the son of Johnny. Released in 1980, song hit big overseas and number 1 in Australia. Ricky had recorded it at the same time but didn’t release it, respectful of Rocky’s potential success. Rocky still remembers Ricky’s consideration and kindness to this day.
“Lucky Boy” was written by Johnny & Dorsey Burnette and Ricky recorded it during his final Curb Sessions in September, 1985 as a tribute to the Burnette family – as well as it being a great rocker!
Hope you enjoy the tracks on this special LP vinyl record, complete with some of the different versions that were common for Ricky’s band to experiment with during their