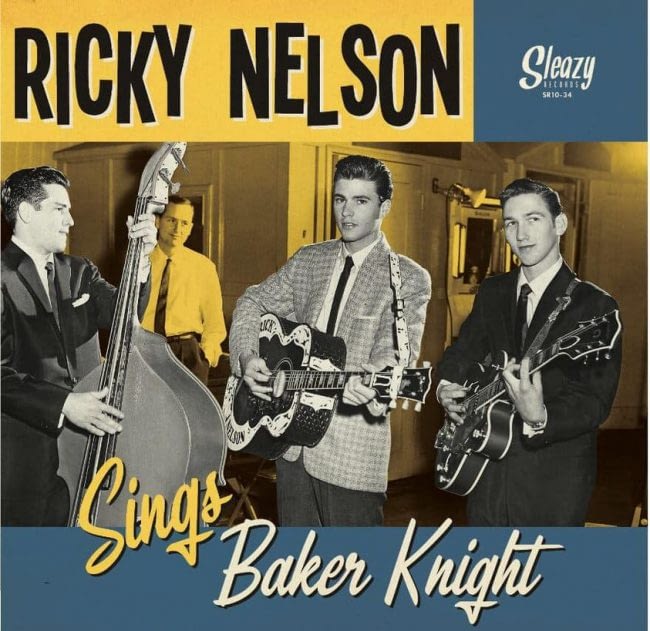 Baker wrote 22 songs that Ricky recorded from 1958 to 1976, more than any other composer that Ricky chose to use. I don’t believe that was by design but rather due to the quality of songs that Baker wrote from his own life’s experiences and state of mind, songs that ranged anywhere from mournful ballads to popular contemporary styles, to genuine and authentic rockers.

The 12 tracks included on this record represent the entire range of these musical categories, including some of Baker’s finer compositions. But all of Baker’s songs were recorded with excellence by a great team of engineers, producers, and musicians. And when Ricky played them in concert, all were performed enthusiastically and interpreted in which they were intended to be.
All the songs that Baker composed for Ricky have fortunately been officially released. Excellent alternate versions of some of these songs have been posthumously released as well, with exception of a few that have been held back into Ricky’s vast and exceptional session catalog.

Before Baker passed away in 2005 at 72 years of age, he authored his autobiography. He wrote it mostly to recount his internal struggles with survival and his continued quest for living a peaceful life. It’s entitled “A Piece of the Big-Time” and was published just before his passing. The memoir provides insight and perception into the songs that he composed for Ricky including the depth of the librettos that Baker endured and expressed. It also provides the visualization into his partnership and experiences with Ricky Nelson and his substantial musical network.

The main thing to appreciate is that Ricky and Baker were friends, establishing a degree of separation that was both mutually warm and respectful from the very beginning.