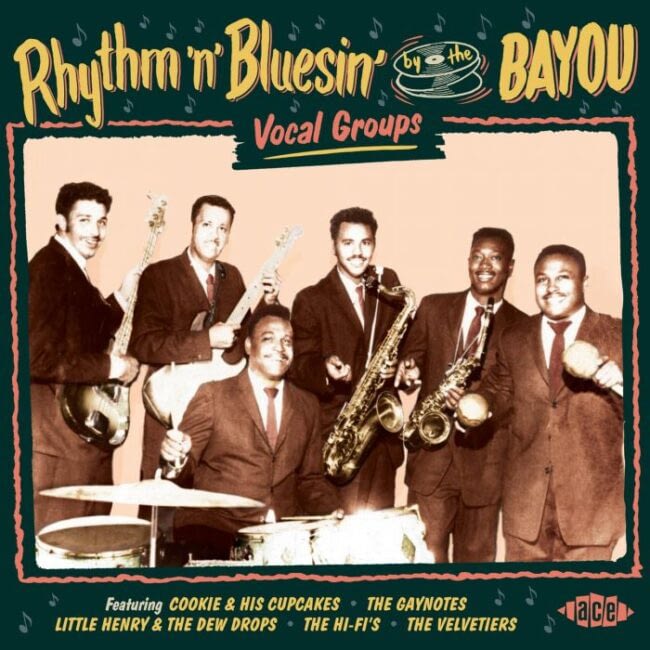 Setting out on the “By The Bayou” journey, I didn’t envisage reaching CD 12. The project started as a vehicle for white Louisiana rockers, but exploration of the tape vaults of J.D. Miller and the catalogues of Eddie Shuler’s Goldband, Floyd Soileau’s Jin, Sam Montelbano’s Montel and Joe Ruffino’s Ric and Ron labels revealed more than enough great vocal group material to fill a dedicated CD. So here is a collection of chanting rockers and sweet harmonies, rather overlooked as ingredients which go into the rich gumbo of South Louisiana music of the 50s.

Cookie & His Cupcakes, the best known of the featured artists, contribute a top-notch cover of Jivin’ Gene’s swamp pop classic ‘Breaking Up Is Hard To Do’ – pure gold in this context. The groups backing solo artists Sticks Herman, Charlie Morris, Sonny Martin, Tabby Thomas and Katie Webster may well have been brought in especially by Shuler or Miller but it is highly likely they were musicians hanging around the studios looking for a gig. This happened all the time in the 50s and 60s in South Louisiana – read in the liner notes how Henry Clement ended up playing harmonica on an early Lightnin’ Slim disc.

Thanks to documents found in the Miller vaults and interviews with “Little” Henry Clement, it’s quite satisfying to be able to clear up some of the confusion regarding the Gaynotes and Little Henry and his Dewdrops. On the other hand, some of the tape boxes we discovered were marked merely “male vox”, “black group” or “group”, so we may never know who comprised the Hi-Fi’s, the Velvetiers or the Raves. Suffice it to say they could all rock or doo wop with the best of them.

04 I Need Your Loving – Charles Morris

07 Give Me Your Love – Sticks Herman

09 Plea Of Love – The Gaynotes

12 Waiting In The Chapel – The Gaynotes

13 What Have I Done Wrong – Little Henry

19 Married Too Soon – The Gaynotes

22 Some Other Time – Sonny Martin

27 Breaking Up Is Hard To Do – Cookie & His Cupcakes