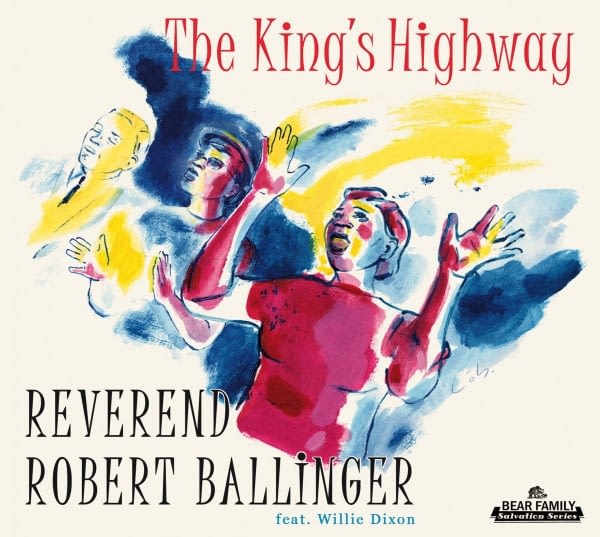 A double CD with recordings by Reverend Robert Ballinger kicks off the new gospel CD series on Bear Family!
Mostly with a trio, accompanied by bass (Willie Dixon) and drums (Odie Payne), the pianist and singer recorded some of the most powerful Blues-drenched Gospel numbers in the 1950s and early ’60s.
Musically, the Reverend’s vocals are more reminiscent of blues and R&B shouters than of traditional gospel singing in African-American houses of worship; as a pianist, he impresses with his extreme, pounding playing in the best barrelhouse tradition.
Recordings for United, Chess, Artistic and Peacock.
Extensive liner notes by Chicago author Bill Dahl, carefully remastered recordings.

From the 1930s on, Chicago served as the nurturing cradle of modern gospel music, thanks to the incredibly prolific Thomas A. Dorsey and his small army of protégés, choirs, and choruses. Every so often, an outsider with his own concept crashed the Windy City’s burgeoning gospel scene—and sanctified evangelist Rev. Robert Ballinger’s thundering musical vision was about as close to rock and roll as you could come while still working in service of the man above. Rev. Ballinger entered a Chicago recording studio for the first time in late 1952 under the auspices of United Records.

The seven sides wouldn’t see light of day until Delmark Records, now owner of the United’s archives, featured five of the reverend’s sides on a 1997 gospel CD. The piano-pounding Ballinger debuted in 1955 on Chess Records with an inspiring rendition of Sister Rosetta Tharpe’s rollicking This Train as blues legend Willie Dixon applied thundering bass (Dixon dug it so much that he wrote My Babe around its chord changes and melody), then migrated over to Eli Toscano’s Artistic logo in 1958 for another one-off single before cutting two wild early ’60s albums for Don Robey’s Peacock label—and they’re all on this compilation.

There was nothing stodgy about the Cincinnati-born Reverend Robert Ballinge, he rocketed straight for the heavens every time out, punching his 88s with two-fisted abandon and unleashing a gritty vocal attack not all that far removed from that of Ray Charles. Give Reverend Robert Ballinger a chance, and he’s liable to save your soul with his high-flying sanctified houserockers!