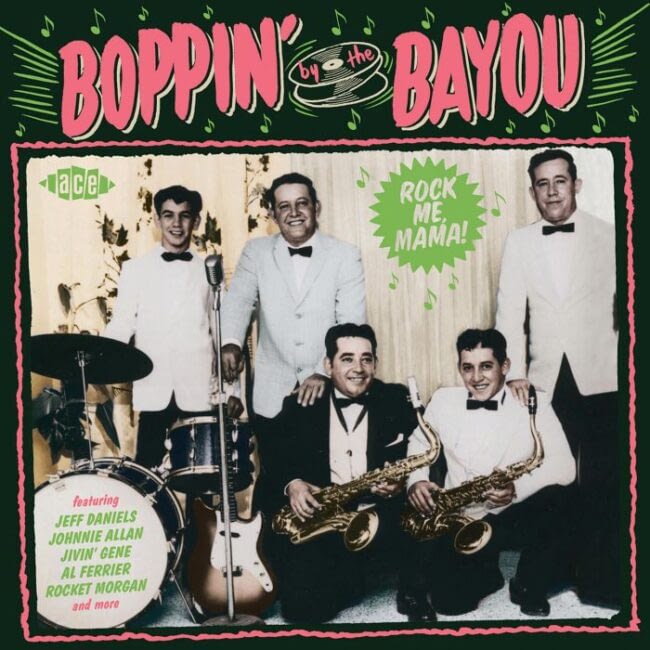 Time to roll up the carpet and put on your dancing shoes – 28 killer-diller Louisiana tracks.

The eleventh CD in the “By The Bayou” contains some real skirt-swirlers, with a couple of slower numbers slipped in to break up the tempo. In keeping with the other “Boppin’” discs in this series, we have included some pure rockabilly and Cajun tracks alongside the swamp rockers.

This time around we have added to our regular sources – the vaults of J.D. Miller, Eddie Shuler and Floyd Soileau – with a dip into Hack Kennedy’s Big Howdy and Big B labels, plus rare goodies from the Richland logo out of Morgan City, Sho-Biz from New Orleans and even one track from the mighty Mercury.

Our cover shot is of the little-known Richard Bros, whose ‘Gonna Work’ is a defining track. The lyrics might not mention crawfish, gumbo, bayous or Spanish moss, but this slice of primitive rock’n’roll could have come from nowhere but South Louisiana – you can feel the humidity of the wetlands oozing from every riff.

It is pleasing to bring you the Jeff Daniels, Billy Blank, Dayward Penny and Danny tracks thanks to the good offices of Dave Travis who bought the Big Howdy and Big B labels from the original owner Hack Kennedy some years back. I had been looking to lease this material for some time so it was ironic, when I finally tracked down Kennedy’s son, to learn that the ownership was right here in the UK. These tracks needed documenting in the context of Louisiana’s rock’n’roll history. ‘Switch Blade Sam’ is arguably the best-known track on the CD, but the others are a little more obscure.

This CD is here for your enjoyment. It’s all about the sounds bouncing out of your speakers, vibrating the floor and your ears. Put this disc in your player, transport yourself to a little club by the bayou and bop the night away.